Horticulture is one of those endeavours that regularly allows one person to have a global impact through nothing more elaborate than dedicated, applied pottering. One such potterer – I should really say plant breeder – was Monsieur Maillette…

He was a small-scale farmer from Valensole, a commune in the Alpes-de-Haute-Provence department in southeast France and, starting in the 1920s, he dedicated the next thirty years to breeding and selecting Lavenders with the sole intent of producing the best plant for producing oil.
By the early 1950s, he had succeeded – Lavandula angustifolia ‘Maillette’ had arrived. Today, it is the most widespread angustifolia variety grown commercially in France.

Lavandula angustifolia ‘Maillette’ is considered one of the best – some would say the best – Lavenders for oil production. But you don’t have to be planning a distillery to plant this variety because the potential of producing good oil always means the certainty of enjoying a great fragrance.

And while there are no unattractive Lavenders, Lavandula angustifolia ‘Maillette’ is particularly engaging. Even for a Lavender, its sweet perfume is especially intense and if fragrance heads your wish-list, then you need look no further. Not that it disappoints if you also want visual appeal…Its foliage is a subtle green-grey with elegant, elongated leaves and its flower heads are unusually barrel-shaped, packed tightly with dark lilac flowers, reminiscent of stars. They are at their best during July.

If you find that Lavenders can be a little unruly, Lavandula angustifolia ‘Maillette’ offers a better-behaved alternative – it is bushy, of course, but is also compact and maintains its upright stance as it grows.

Like all Lavenders, ‘Maillette’ doesn’t like wet feet and insists on full sun, but otherwise it is one of the hardiest and easiest Lavenders to grow. Excellent for home drying and potpourri, it also has culinary possibilities as a tisane or alternative to Rosemary – but use sparingly. It is a favourite of bees and adds a citrus tang to their honey.

Plant as edging (especially if you want a more formal look), in clumps or in containers. A genuine delight. 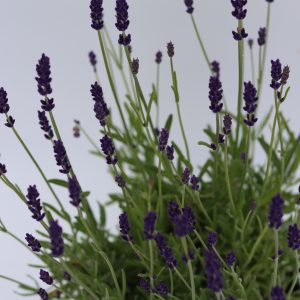